How can we help you today?

This report is made available with Akixi 2000 or 3000 and by default, this report style displays a list of all hunt group devices, with call statistics shown against each item for inbound calls that have specifically been distributed by each row's hunt group device.

The report style also supports display using the icon (BLF) view types, which can be achieved by modifying the report and selecting the required view type from the "Displayed As" drop-down menu... 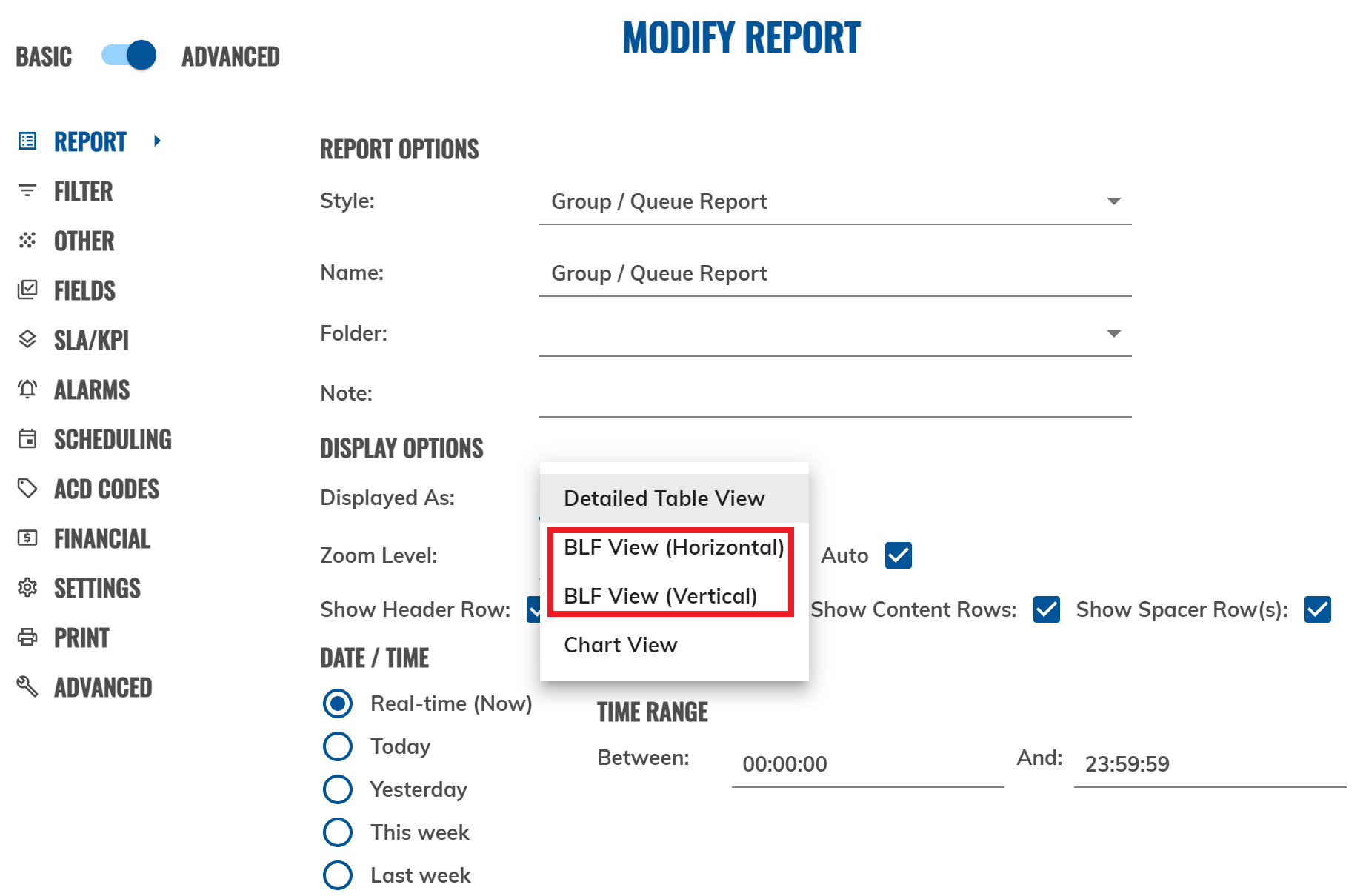 ...or use the drop-down at the top right of the report. 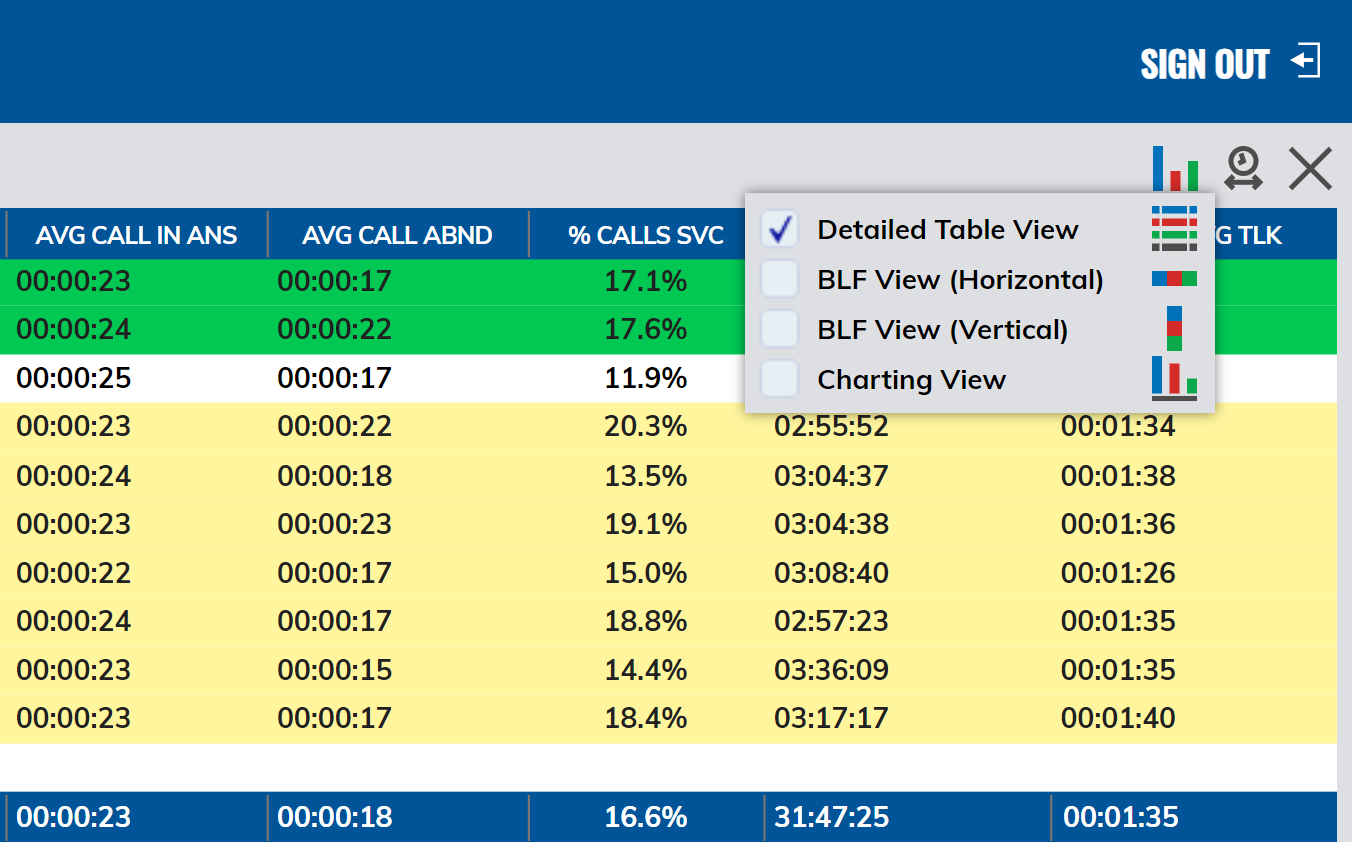 This will in turn produce a report that looks more similar to the below:

The report has two modes of statistics calculation based on how the "Include Calls For Group Device Members" setting is configured within the Advanced tab of the Report Properties window as follows:

• Include Calls For Group Device Members(Checked Off)
This is the default mode of statistic calculation when new Hunt Group List reports are created. The report only shows inbound calls that have specifically been distributed by each row's associated hunt group device - All statistic variants for outbound calls count & time values show as empty in this particular calculation mode. When run for the "Real-Time" date/time option, dynamic row highlighting is supported based on whether calls are currently queueing in, being offered by, or answered within the corresponding hunt group. This particular mode of statistic calculation is most useful when comparing the inbound performance for calls distributed to and/or queued at multiple hunt groups and/or ACD queue devices.

• Include Calls For Group Device Members (Checked On)
Inbound & outbound call statistics are calculated for both calls distributed by each row's associated hunt group device, as well as for calls involving any group extension or agent members. In this mode, multiple report rows can potentially include statistics for the same call depending on whether the same agent and/or extension devices are members of different hunt group devices shown by the report. Therefore the report does not show overall call count and time statistics within the totals row of the report since they would normally show inflated values that could not easily be interpreted by reporting users. When run for the "Real-Time" date/time option, dynamic row highlighting is supported based on whether calls are currently involved within the corresponding hunt group or any of its group extension devices and/or agent members. This particular mode of statistic calculation is most useful when comparing the inbound & outbound performance for teams of individual extension or ACD agent devices.

Note that the way inbound & outbound call statistics are calculated for internal calls is specifically based on whether member devices and/or agents are specifically receiving calls or making them respectively. This differs from the way that statistics are calculated in Desktop Wallboard reports and interval-based reports (i.e. Calls By ½ Hour Interval, Calls By Day, etc.) when they are filtered by an individual group member extension device or agent, where both inbound & outbound call counts would always be incremented for internal calls that had the corresponding extension/agent involved as either the calling (making) and/or called (receiving) side of those internal calls. For example in the "Hunt Group List" report, an internal call received by a group member would increment only the inbound call statistic count, whereas the outbound call count would only be incremented for group members that specifically made an outgoing internal call.

Note that on Akixi 3000 configurations, this report can also be enabled to display email and LiveChat contact item statistics, assuming the correct Omnichannel integrations have been configured by the administrative user. This works much the same way as with calls, and will show statistical information for emails and LiveChat items against any given group device.

Did you find it helpful? Yes No

Send feedback
Sorry we couldn't be helpful. Help us improve this article with your feedback.